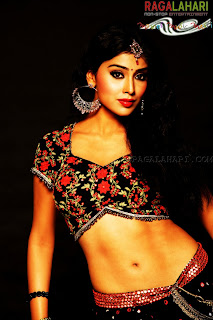 Shriya Saran, who debuted in Mahesh Bhatt’s Awarapan, is thrilled to have bagged a role in Deepa Mehta’s international production What’s Cooking. This is Shreya’s second international assignment as she is already doing Hyde Park Entertainment’s Other End of the Life, produced by Ashok Amritraj. The movie, being directed by Jimmy Dodson, also has Anupam Kher, Tara Sharma and Jesse Metcalfe in the cast.

She had one of the biggest hits in her career with Chatrapati opposite Prabhas. Most recently she appeared opposite Vijay in Azhagiya Tamil Magan and she is currently filming with Vikram in Kanthaswamy.
on June 29, 2011 No comments:
Email ThisBlogThis!Share to TwitterShare to FacebookShare to Pinterest
Labels: Actress Personal photos, Bollywood Actress, Bollywood Beauties, Hot Navel, Shreya, South Indian Actress, Wonderful Facts
Newer Posts Older Posts Home
Subscribe to: Posts (Atom)