This is not a fake photo according to the news sources, Most of the people are  Desperate to know how Aishwarya Rai Bachchan's baby daughter 'Beti B' looks like, somebody has posted a picture of Aishwarya Rai with a baby on  social networking site Twitter.

The photograph that did the rounds this weekend was an alleged picture showing Aishwarya with a baby seated on her lap.

The rumour doing the rounds is that it is an original photo of Aishwarya and her daughter, Beti B.

The picture went viral and everyone leaped to the story that Beti B's picture is finally out. But take a closer look and you will find out it's not a recent picture of Aishwarya.

This picture shows Aishwarya quite slim with less chubby cheeks. After her pregnancy Ash has gained lot of weight and we witnessed a visibly plum Aishwarya when she recently attended Ritesh Deshmukh's wedding. Her chubby cheeks showed her pregnancy flabs still intact even after three months.

Infact the baby Ash is holding in the picture looks nearly 5-6 months old, whereas Beti B is three months old. And fans will also remember grandfather Amitabh Bachchan had written in his blog after the birth of the girl child, "it seems the little one has lighter eye just like the mother". But this picture doesn't look like the baby has light eyes.

Morphed pictures of Aishwarya Rai Bachchan with her baby have done the rounds of internet in the past. In fact, Amitabh Bachchan had denied all the speculations that claimed pictures to be that of Aishwarya and her baby.

Some twitter users claim that the new picture is that of Aishwarya with her nephew Vihaan Rai.

Whatever it is, the truth is that Aishwarya Rai Bachchan's fans are desperate to catch a glimpse of Beti B and eager to know her name. 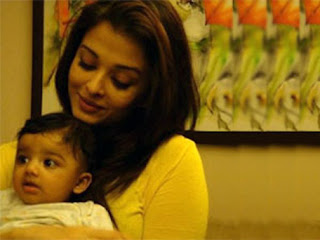 We are looking for names as your COMMENTS..